Posted on September 6, 2015 by TonyAttwood

So this is not to say that Dylan should have been developing Hard Rain (no one of course can tell him what he should be doing) but straight after Hard Rain he was back to writing a more traditional style of music.  The fact that he could move between such different genres shows the power of his creative drive at this time.

Oxford Town itself resulted from a competition in Broadside magazine (issue 14) where the invitation was sent out for composers to write a song about James Meredith’s University of Mississippi enrolment.  It was one of two very notable submissions – the other being “Ballad of Oxford, Mississippi” by Phil Ochs.

The magazine was one of those from the era which had a small circulation and was produced using fairly basic technology, but which had an influence far beyond its appearance and circulation.  It was the heartland of the debate as to what was happening with pop, rock, folk, traditional music and so on.

The publishers were friends with Pete Seeger and Woody Guthrie, and strongly socialist in their outlook at and political activity.  Music was seen as part of the drive for change and social justice.  The magazine lasted for over a quarter of a century.

Analysis and review of the actions and work James Meredith within the American Civil Rights Movement are readily available and I do not mean to reduce his importance or the importance of the movement by not dealing with his work in detail.  But because it is so widely covered on line I will just cover a couple of basics, perhaps primarily for friends in England where there were and still are racial issues, but where segregation followed a different route and the name James Meredith is not widely known.

In 1954 the Supreme Court in the USA ruled that segregation of public schools and universities was unconstitutional, as they were funded by all taxpayers.  However although the federal government had asserted the right of all Americans to attend state funded universities regardless of colour, in reality many universities operated a policy of being white only.  In 1962 Meredith applied for a place at the University of Mississippi and was ultimately the first African-American student to be admitted to the University.  His aim therefore was encourage the national government to enforce what it had said was the right of all the population.

On 31 May 1961, Meredith, with the backing of the National Association for the Advancement of Colored People took the university to court, pointing to his academic record and his service to the state in the military as justification for his having a place.  Ultimately he won the case in the appeals court and again in the Supreme Court and in September 1962, the District Court directed the University to register Meredith.

The Democratic Governor of Mississippi opposed this, and the state passed a new law seeking to ban Meredith on the grounds of a previous criminal offence.  The government overruled this, the Governor refused to admit Meredith, and the Governor was found to be in contempt and threatened with a fine $10,000 a day unless he gave way.

The Governor did give way, President Kennedy issued a “cease and desist” proclamation.  When a mob gathered to stop the registration the National Guard was ordered in.  Two men were killed in the rioting, as Dylan notes in his song.  With the National Guard now in control Meredith was registered and this is seen as a key moment in the civil rights movement.

Meredith’s time as a student was extremely arduous as the protests did not cease but he gained a degree in political science in 1963, and others followed suit.

In using the phrase “Oxford Town” Dylan is (as I understand it from my distance of many thousand miles) using poetic licence; from what I read the University is described as being in Oxford, Mississippi, not Oxford Town.

And just as the song does not mention the university, the song also does not cite Meredith, but Dylan is quoted as saying “It deals with the Meredith case, but then again it doesn’t…” which is a fairly typical Dylan comment.  He continues “‘Why doesn’t somebody investigate soon’ that’s a verse in the song.” 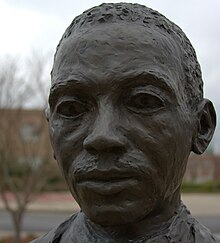 In 2002 a statue of James Meredith was installed at the University on the 40th anniversary of his admission.

But although Dylan may have slightly changed the name of the location, the song had enormous power because of its absolute simplicity.

In the introduction the guitar rotates between two chords, and then continues to do this through the song, but it is in essence a song on one chord, with all the power coming from the melody.   (Dylan once described it as a banjo song played on a guitar, and that chord rotation is most certainly reminiscent of banjo music).

Oxford Town, Oxford Town
Ev’rybody’s got their heads bowed down
The sun don’t shine above the ground
Ain’t a-goin’ down to Oxford Town

Even the opening verse tells us there is something deeply, seriously wrong here.  Dylan doesn’t have to say why, because we know.

The rhyming structure is interesting though (although one hardly notices it until going back to seek it out).   In verse 1 above we have lines 1, 2, and 4 rhyming.   In verse 2 all lines rhyme.

But then Verse three – one suddenly wonders “what does ‘around the bend’ mean?”   In English English the phrase is slang for having a bizarre or odd idea.  A person says “I’ve working on a time machine” and the friend replies, mockingly, “You’re round the bend”.    Not such that it makes you insane, but that is just an odd, odd, thing to say or do.  In that context it doesn’t seem at all strong enough for what happened at the university, so maybe there is another meaning in American English.

Oxford Town around the bend
He come in to the door, he couldn’t get in
All because of the color of his skin
What do you think about that, my friend?

One fears that perhaps it was just a throw away line to get a rhyme with the last line – and yet it seems quite unnecessary.   The rhyming structure is already established as variable, and since “friend” is hardly essential to the meaning, one wonders why another phrase wasn’t used – unless there is an American meaning to the phrase “round the bend” that I don’t know.   (Round the Bend is also a novel by Neville Shute, published 1951, which deals with religion’s relationship to good works, but that doesn’t seem to take us anywhere).

Verse four again seems to drift away from the point.  The visit of the man and his lover and her child is hardly central, and seems only to be there to find a rhyme with “come” – although it is only a half rhyme.  All the drive comes from the proper rhymes of lines 2 and 4.  It is almost as if Dylan and his family stumbled across the issue while passing, which is again odd.  This was national news.

Me and my gal, my gal’s son
We got met with a tear gas bomb
I don’t even know why we come
Goin’ back where we come from

But then after this we are back on track.  The rhymes work and the urgent need for this to be resolved (in the last line) is made more powerful because the rhymes are working, and each line is vital to the song.

And yet despite the fact that some of the lines appear to have been thrown in without deep thought, the song has the power because it is so simple and understated.   A “this is the world we live in – we really ought to get this sorted” type of song, except that it is not “we” who need to take action, but rather “someone”.

Indeed that “someone” is the oddity, and it is odd that Dylan specifically mentioned that line in his commentary.  He’s not doing anything, I’m not doing anything, there’s no call on the President.  Just someone.  Maybe that is the point.  “We sit here stranded” waiting for others to act.  (Mind you, I seem to be able to relate every Dylan song back to Johanna, so maybe not).

I personally find this very strange.  I have known the song since its first release in the UK; I can even remember the record shop where I bought it with my pocket money as a kid.  As I came to think about writing about it today, I could sing the whole song, get every word right and play the guitar part without listening to it again.  It is there deep within me and I haven’t played it or heard it in years.  And yet, I still find it curious, almost as if Dylan just wrote it and sang it, without going back to think,  “couldn’t I say a little more there?”

Maybe he was being pressured to finish off his piece for Broadside, maybe he was already moving on to something else.  Who knows.

But it is still a poignant, meaningful, powerful remarkable piece of music.  I’m glad I’ve still got that original copy of the album all these years on.

Index to all the songs on Untold Dylan

This entry was posted in Freewheelin. Bookmark the permalink.