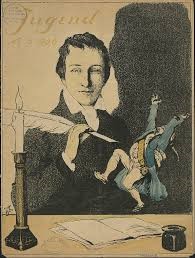 “In general, the inhabitants of Göttingen are divided into students, professors, philistines and cattle, which classes are nothing less than strictly separated. The cattle class is the most important. The city itself is lovely and most pleasing to look upon with your back turned to it.” (The Harz Journey, 1826)

One of the greatest Jewish poets of the nineteenth century, the German Heinrich Heine, is in more ways than one Dylan’s artistic soulmate. Both, of course, have an admirable talent for making great emotions small and are equally moving with their ability to express private suffering poetically (lovesickness, feeling displaced) – but so do dozens of other word artists. More exclusive with both poets is the sardonic side; the casual sarcasm, as in the above quote, for example. And the dead-pan cynicism with which sung values such as “friendship” or “beauty” are shattered is another Common Denominator. One of Heine’s nicknames fits the Dylan of the mid-sixties perfectly: the malicious nightingale. As does a stylistic tool that characterises Heine: the ironic point.

The ironic point is usually a closing verse line or a concluding quatrain that destroys expectations by ending the preceding lofty, sentimental or melancholy lines with an inappropriate platitude, with a dry comic footnote or with a vulgarity;

Dylan uses it with some regularity. Don’t follow leaders / Watch the parking meters from “Subterranean Homesick Blues”, albeit only a oneliner, is one of the most famous; the Basement gem “Nothing Was Delivered” has the very Heine-like chorus

Nothing is better, nothing is best
Take care of your health and get plenty of rest;

… and the punch line of “She Belongs To Me” (And for Christmas, buy her a drum) banalises in one fell swoop the previous elegant, exalted eulogies and stately honours (“bow to her on Sunday”).

“Tombstone Blues” concludes with a similar kicker as Heine’s poem 72, “When you become my married wife”:

Three verses suggest that the narrator wants to express feelings of tenderness and concern for the well-being of a dear lady, only to torpedo that expectation in the closing line with a vile put-down. Heine can be proud of his twentieth-century torchbearer.

Yet that vile ironic point is not the most remarkable thing about this final quatrain; the suddenly tilted narrative perspective is. In the last verse of Dylan’s magnum opus (or rather: one of Dylan’s magna opera) “Desolation Row”, on this same record, we see the same plot twist: suddenly, out of nowhere, a “you” appears, tilting the narrative perspective of the whole text. For eleven quatrains we have followed the monologue intérieur of an associative mind, which now suddenly turns out to be not a stream of consciousness at all, not the flow of thought of the narrator, but a dramatic monologue, a monologue of a – not too gallant – sensitive person addressed to an otherwise invisible lady.

It is a second argument to see “Tombstone Blues” as a preliminary study for “Desolation Row”. The trick to unite unrelated protagonists for one verse is a first trigger. Ma Rainey and Beethoven, Galileo and Delilah, Jezebel the nun and Jack the Ripper… Just like the poet for “Desolation Row” creates unlikely duos like Cinderella and Romeo, Einstein and a jealous monk, and the Phantom of the Opera and Casanova.

In both songs the resulting alienation is similarly deepened. By putting contextless quotes in the mouths of the surprising protagonists, for example. Everybody’s shouting “Which Side Are You On?” is such a contextless quote from “Desolation Row”, with the same alienating quality as here the Commander-in-Chief’s “Death to all those who would wimper and cry”. Just as unusual attributes are used in both songs with an identical distorting effect. Einstein is sniffing drainpipes, the Commander-in-Chief drops a barbell. The superhumans are working with heart-attack machines, Gypsy Davey handles a blowtorch.

However, the last trigger in favour of seeing “Tombstone Blues” as a preliminary study for “Desolation Row” remains the most decisive: that unexpected change of perspective, the completely surprising introduction of a “you”. It seems that the poet himself has been surprised too – in this preliminary study it does tilt the text, but it is tilted nowhere. “Tombstone Blues” does not suddenly offer a narrative, the previous, unrelated verses do not suddenly take on, in retrospective, a red thread. But when Dylan writes “Desolation Row” shortly after this, he does remember the power of this unexpected change of perspective, and has found a function for it as a by-catch. Now the narrator says, introducing the “you” in passing:

… which opens the gate to understand the previous 585 words as the content of that letter. The narrator has encrypted the contents (I had to rearrange their faces and give them all another name), but now those seemingly unrelated verses have been given a red thread – being the content of one letter, that is.

This will not work with “Tombstone Blues”. Here the narrator regrets that he was unable to write a melody that would have helped the “you”. Even if we understand “melody” figuratively (as an “expression of admiration”, perhaps, or as an “articulation of consolation”), the change of perspective does not bring a connecting, uniform line in the previous verses; they remain incoherent tableaux.

Missed opportunity, the novice Beat Poet Dylan might think, looking back. Kerouac’s ferocious poems still have a thread (describing a journey, or a delirium, or impressions from a park bench) and even Burroughs’ experimental cut-up novels still have an overarching narrative. Dylan, therefore, creates his own re-enactment and builds another, now perfect, masterpiece with “Desolation Row”. Perhaps he has indeed read Heine in the meantime:

To be continued. Next up: Tombstone Blues part XIII: I walk 47 miles of barbed wire (finale)

We are approaching 2000 articles on this site.   You can find indexes to series linked under the image of Dylan at the top of the page and some relating to recent series on the home page.