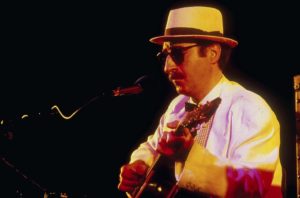 Leon Redbone, the famously mysterious musician whose Ragtime way of strumming a guitar and singing, and who very much numbered Bob Dylan among his fans, has passed away at the age 69.

He was notorious as a joker, and indeed when journalists and interviewers asked him for a picture to go along with the story they were creating he would often hand over a photo of Bob Dylan.

It is also widely reported that Bob Dylan went to Mariposa Folk Festival in 1972 particularly to find him, and in an interview Dylan said, “I’ve heard he’s anywhere from 25 to 60… I can’t tell. But you gotta see him.”

Bob added that the music was “so authentic you can hear the surface noise [of an old 78 rpm record]” adding that he ever started a label, he would sign Redbone.  Redbone’s first album was released by Warner Bros three years later. He was a prolific live performer and also released more than 15 albums over a four-decade career.

But one thing that really linked the men together was that Redbone would often rearrange the classic songs he sung, changing the chord sequences, and most interestingly not rehearsing with the band.   He was also notorious for not following the agreed setlist but simply playing what he felt at that moment, requiring the band to follow him.  That sounds somewhat familiar!

He also became a regular on Johnny Carson’s “Tonight Show.” More recently, he served as the voice of “Leon the Snowman” in Will Ferrell’s 2003 holiday hit “Elf.”

His introductions to his songs were also something to behold – he was the opposite of Dylan on stage, chatting away to his heart’s content.  At the same time he could be funny, contradictory, vague, rambling, and always knowing exactly what he was doing and where he was going but making it seem he did not.

If you enjoy this music, you might just want to leave the video running after the first song – it is a real treat.

Redbone was known for eternally making up stories about his life.  According to several reports, when asked for a biography for a music festival program, he handed over copy which said, “I was born in Shreveport, La., in 1910 and my real name is James Hokum” — which of course is fantasy.

In fact what he did share with Dylan was his sense of privacy – and both men dealt with media intrusion by making things up.  In a Canadian magazine 19 years ago he said, “Some people seem to believe that as soon as you perform on stage you lose your rights as a private citizen.   They want to find out who I am, what I am, where I was born, how old I am—all this complete nonsense that belongs in a passport office.”

What we do know (or at least think we know) he was born in 1949, in Cyprus. He announced his retirement in 2015, citing health concerns.

Announcing his passing his website said, in true reference to the man himself, said, “To his fans, friends, and loving family who have already been missing him so in this realm, he says, ‘Oh behave yourselves. Thank you… and good evening everybody.’ “

So why did Bob Dylan admire this musician so?  First, most obviously, he was a one-off, and he was original, exactly as Bob Dylan himself is.   Leon Redbone was also a sublime musician, not just as a performer but also in terms of holding an audience and carrying off a show.

Plus he had a magnificent voice which he knew exactly how to use, understanding exactly how the accompaniment could compliment the vocals.   Also he brought a style of music to my generation that had been brought up on rock n roll.  He reminded us all of another style, another place, another way of seeing the world.  When he told the audience to behave, you knew that is exactly what he would not be doing – but in his own inimitable way.

In addition to his many other achievements Redbone appeared on children’s programmes such as Sesame Street, several times singing over films songs such as “Blueberry Mouth”, “Have You Ever”, and “What Do They Do When They Go Wherever They Go?”

He appeared as Leon in the 1988 film Candy Mountain, and narrated the 2011 Emmy Award-winning documentary Remembering the Scranton Sirens, celebrating the musical legacy of one of the most significant “territory” dance bands in American musical history.

He performed also in a Budweiser beer commercial in which he lay on a surfboard singing “This Bud’s for You”, and in a British Rail advert in which he sang the song “Relax”.

We have his recordings… and with those he will always be remembered.

We have a very lively discussion group “Untold Dylan” on Facebook with over 4200 active members.  (Try imagining a place where it is always safe and warm).  Just type the phrase “Untold Dylan” in, on your Facebook page or follow this link