Dylan’s once only file: You’re too late and the Old Rock n Roller

This new series (of which this is the third instalment) takes in songs that Bob has performed once and only once on stage.

Two songs this time – first off “You’re too late” by Lefty Frizzell.

William Orville “Lefty” Frizzell was a songwriter and performer who was popular for ten years or so and had two major hits in 1950.  In this case he wrote the song with Herman P Willis, and Bob played it at Daytona Beach, FL, Jan 29, 1999.  There is a story that Hank Williams wrote this (see the album cover below) but I’m fairly sure this is a  Frizzell original.

Lefty Frizzell was one of those men who didn’t have a long career which brought him loads of money, but his influence was profound, with so many stars of the era citing his influence from Roy Orbison to the Everlys.  Tragically he faded from the public’s after ten years or so and he took to drink, dying aged 47.

But his impact on other singers in terms of how country music could be sung has outlasted him, and he is still remembered by those who have a particular knowledge of this type of music.

This is the original 1954 recording – as I say, forget the cover reproduced below.  Perhaps it got that way as Hank Williams and Lofty did tour together.

His number 1 hit was “Give Me More, More, More (Of Your Kisses),” and Frizzell thereafter had personal problems, arguing a lot, spending the money and eventually falling out of favour.

The second choice this time is Old Rock n Roller performed by Bob on 3 July 1990.

And here is the original…

Charlie Daniels was both a session musician and a composer, with his song “It Hurts Me” being recorded by Elvis Presley.

He was friends with Bob Johnston (1932 – 2015) hence the connection with Bob Dylan.  And thereafter he played guitar and bass on Dylan’s 1969 and 1970 recordings, as well as on Leonard Cohen records.  Thereafter he became a producer himself. 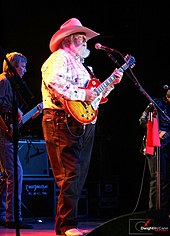 He reached the top 10 with “Uneasy rider” and also played violin on a number of albums.  He also had a hit in 1975 with the Charlie Daniels Band, “The South’s Gonna Do it Again, and won a Grammy for “The Devil Went Down to Georgia” which was another top 10 hit and was included in Urban Cowboy.

There is more, more and more – he wrote film scores, guest starred in TV shows, and was inducted into the Grand Ole Opry and the Country Music Hall of Fame.  He died this year (2020) at the age of 83.

1 Response to Dylan’s once only file: You’re too late and the Old Rock n Roller