As I went out one morning: Dylan paints an abstract revolution

In my house, at the foot of the stairs, is a picture that I bought some 16 years ago.  The buying of the painting was quite an important personal moment in my life (I won’t bore you with it now, but I can remember the exact details of how, where and why I bought it) and I must have looked at it every day I’ve been in the house ever since.

It’s a picture of images – doors, walls, columns, squares… it looks like it could be a real place… but it isn’t.  Its an impression of a reality, rather than reality itself.

I mention this because it has often occurred to me that some Dylan songs are like that picture – they are made up of realistic elements, but they don’t coalesce into a clear finite image of the real world.   They are, like my favourite picture, reflections of overlapping elements taken from reality – not photographs of reality.

As I went out one morning is like this.  That title itself is like the representation of a standard door.  The folk version of “I woke up this morning” in the blues, as Heylin has pointed out.

But although this is a commonplace, what happens next is anything but commonplace for suddenly we are into the world of Tom Paine.

I’ve pondered long and hard about Tom Paine in this song, and have come up with all sorts of explanations as to what Dylan was referring to.  I am not sure which, if any, are true.   Tom Paine the French revolutionary, Marianne (the girl) was and is the symbol of the French Revolution, Tom Paine was one of the cornerstones of the American revolution, Tom Paine was also a famous British engineer, there’s an apparent link I’ve found with WH Auden, the English American poet of great renown, and we have the National Emergency Civil Liberties Committee… it goes on and on.

Quite possibly many of these people and concepts were all lurking about in Dylan’s mind as he wrote – and it is indeed interesting that he wrote the music not in a normal major or minor key of the type that we hear in 99.99% of our music today, but in a mediaeval mode.  I think it is the phrigian mode – if you want to experiment sit at the piano and play the white notes only from E up to the next E.  That scale of eight notes doesn’t sound major or minor, but actually sounds rather old and mediaeval.   That is the phrigian mode – it was quite a thing in the 15th and 16th centuries – but of course not much used now.  At once it sounds, well, mediaeval.

So, to try somehow and unravel this semi-abstract picture…

Tom Paine (9 February 9 1737 to 8 June 1809) was an English political activist whose life I first came across when studying the French Revolution of 1789, is indeed still a most famous man not least because he is considered one of the cornerstones of the American revolution and the inspiration of the revolt of 1776.

I know of him not just because I studied the French Revolution because two of the towns he lived in – Thetford in Norfolk and Lewes in Sussex – are towns I know.  The former because it is not too far from where I now live and indeed I was there just a few weeks ago, and the latter because it was close to where I studied in my teens and early 20s.

More well remembered in the UK and indeed in France is The Rights of Man which defended the French Revolution even as it was turning into the Terror.  Paine was tried for sedition in England, and elected to the National Assembly in Paris only for Robespierre to have him subsequently arrested.  He escaped the guillotine however and eventually it was Robespierre himself who was executed and Paine who was released.

In 1802, he returned to America for the last time but when he died only six people attended his funeral – due to his rejection of Christianity which the citizenary of the new world hated – although it was much in favour in revolutionary France.

Here’s the Thetford plaque (there is also a statue to him in the town, but I don’t have a picture of that). 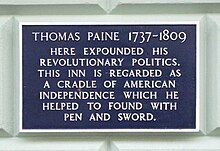 Paine was also an engineer and in 1796 designed the Sunderland Bridge.  (There is still a bridge at this point, but it has twice been rebuilt).  It became the prototype of iron and steel bridges.

And so having discussed Tom Paine what on earth do we make of this?

Are we to take it that the damsel is the Revolution?   The French symbol of the 1789 revolution (the great revolution in France, which led to the break with the rest of Europe as it established government without monarchs, although ultimately led to the rise of Napoleon), and indeed the French symbol of Liberty to this day, is the woman Marianne whose image is still displayed in the law courts, and indeed on euro coins in France and its postage stamps.  She is the symbol of the republic, democracy, freedom and ultimately Liberté, Égalité, Fraternité.

But enough of France.  What about the National Emergency Civil Liberties Committee? Dylan received the Tom Paine Award in 1963 from the National Emergency Civil Liberties Committee.   His subsequent off-the-cuff speech contained a series of references to the world being confused and old timers being out of date was met with at first laughter and then disdain from some of the audience.  Having just listened to it again I am not sure it is one of Bob’s more impressive monologues.

Moving on, let’s try another link: “As I walked out one evening” by WH Auden.  A different time of day but a similar meter, and surely a man of Dylan’s reading will know Auden as much as he knows the oft-quoted TS Eliot and Ezra Pound.

As I walked out one evening,
Walking down Bristol Street,
The crowds upon the pavement
Were fields of harvest wheat.

And down by the brimming river
I heard a lover sing
Under an arch of the railway:
‘Love has no ending.

‘I’ll love you, dear, I’ll love you
Till China and Africa meet,
And the river jumps over the mountain
And the salmon sing in the street,

‘I’ll love you till the ocean
Is folded and hung up to dry
And the seven stars go squawking
Like geese about the sky.

The poem continues and if you don’t know it I recommend it – but then I recommend all Auden so maybe that doesn’t mean too much.

Which leads me to think, maybe Dylan also must have known not just that song but also Funeral Blues from 1938.   If it is new to you try this version read by four different actors.   I think of this not just because it is a famous Auden poem (famous in England at least) but because here there is a feeling of separation and uncertainty that Dylan achieves – although seemingly travelling in a different direction.

Stop all the clocks, cut off the telephone,
Prevent the dog from barking with a juicy bone.
Silence the pianos and with muffled drum
Bring out the coffin, let the mourners come.

So what I am saying is that this song is not, as one commentator put it, “dripping with meaning” but is instead “dripping with unresolved images,” allowing us to make a million meanings out of it, just as I do with my picture of the door, the wall, the columns etc that I consider each morning as I come down from another night’s sleep.

Yes some of those images might be metaphors, and so might some of Dylan’s words, but mostly they are, to my mind, suggestions of images you can build yourself.

If you want to go further the clue is surely that the signer went to breathe the air around Tom Paine’s, meaning to grasp the meaning of Tom Paine’s incredibly important and decisive writing, the writing that influenced perhaps the two biggest revolutions in the history of the formation of the West.

But despite Tom Paine’s offer of liberation we (the girl) are still enchained, because our governments have sought eternally to remove the freedoms that Tom Paine contemplated.  The Marianne effect – and Marianne is now in chains.

In one sense we could be seeing that the relations of two people at the individual level are as complex as the problems of building a complete society.  And personally I love the notion that by offering Marianne as a symbol of the Republic, I will be harmed.  For every supporter of the Revolution it was ever thus.  The revolution is our greatest chance and turns into our greatest defeat.

“Depart from me this moment”
I told her with my voice
Said she, “But I don’t wish to”
Said I, “But you have no choice”
“I beg you, sir,” she pleaded
From the corners of her mouth
“I will secretly accept you
And together we’ll fly south”

So the revolution, at least in France, failed to live up to its original ideals.  As I am far less a student of the liberation of America from British rule than I am a student of the French Revolution of 1789 and the aftermath, I can’t say if the same is true of America, but to me, as an outsider, an occasional visitor, I find the USA in its current form far from the land Paine wanted it to be and the land he proposed in his writings.

Just then Tom Paine, himself
Came running from across the field
Shouting at this lovely girl
And commanding her to yield
And as she was letting go her grip
Up Tom Paine did run,
“I’m sorry, sir,” he said to me
“I’m sorry for what she’s done”

In which case this means, “I’m sorry for what the way in which the meanings of the Revolution have been betrayed.”

So there we are.  Either a painting of ideas in the form of real people, just like the work that hangs at the bottom of the stairs in my house in Northamptonshire, or an allegorical poem about the outcome of Paine’s writing, and the corruption of the revolution.

Details of all the songs reviewed on this site.

The songs of Dylan in chronological order.

18 Responses to As I went out one morning: Dylan paints an abstract revolution