“Worth The Waiting For” by Bob Dylan and Dave Stewart. And a bit more fun.

Posted on October 6, 2018 by TonyAttwood

The song “Worth The Waiting For” by Bob Dylan and Dave Stewart- appears on Stewart’s album The Blackbird Diaries… this is Dave Stewart, Bob’s long time friend who is perhaps most well known for being part of the Eurthymics.

Here is the song … there are two slightly different versions available so I’ve put both up just in case you really do like the song.

In effect I don’t think it is the only Stewart/Dylan co-composition, because “Gypsy Girl and Me” supposedly by Dave Stewart is in fact Bob Dylan’s “On the Road Again” with new lyrics. It is to my ear is a lot more fun that “Worth Waiting For”.

The album containing “Worth the Waiting For” was released in June 2011, but the song was written long before that, as I will try and explain.

There is no mention of the “Worth The Waiting For” song in Heylin, but Stewart has provided us with an explanation.  The lyrics are not Bob’s at all as you can, I am sure, immediately ascertain from the transcript below.

Didn’t you know that it was me
Who loved you all the time?
Would you feel betrayed
If I still had you on my mind?

So many lies that you tried to justify
So many so you could just step out in the night
I don’t care anymore, baby, I’ll just be right here
If you wanna go again, well, that’s alright my dear

All the friends around us thought
That we were the king and queen
We didn’t go out looking for it, baby
We were the scene

To me this song and its co-writing places it around the time of songs like Well well well, Howlin at your window, Tragedy of the trade, Time to end this masquerade

In relation to those songs I have written elsewhere on this site that “my take on this is that all these songs were originally written (or at least Dylan’s input into the songs was completed) in 1985 while Dylan was writing songs for Empire Burlesque.”    So I am placing it in the interim period of that year – the pause between the two sets of Burlesque songs.  The full details of the 1985 songs appears on the 1980s page  and my review of 1985 (obviously written before I came across this song) appears here. 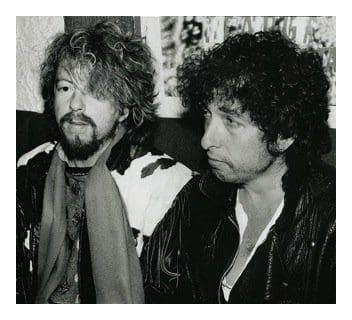 This dating is backed up by the fact that the two guys have been friends for many a long year with Dave Stewart producing tracks for Bob Dylan.   Of this friendship Dave Stewart is reported as saying, “We were always doing stuff but not really trying to play together or be a band. We recorded lots of stuff, sometimes in my church, sometimes in my kitchen, and put it down on cassettes.”   If you want to follow this further there is an interview with Dave Stewart on line here.

To back this dating up (at least to within a year) we have an interview in American song writer where Dave Stewart is asked about the song, and replies…

“In 1984 I was in a studio in L.A., recording and producing something, when the lady at reception rang through to the studio and said, “I have Bob Dylan on the phone for you.” I thought it was my friend joking, putting on a voice, because I’d never met him before, and I’d been a massive fan of his for years.

“So when I actually heard him come on the phone I was about to say, “Stop laughing about,” but then he spoke and I was like, nobody could copy that voice, this really is Bob.

“So I knew immediately it was him and he asked if I wanted to meet up, which we did, and virtually the next day or the day after we made a couple of videos. Then he came to London and we were experimenting and shooting stuff with cameras like friends you know, just doing experiments, not necessarily for anything. Although one of those videos came up in a song called “Blood in My Eyes” the black and white 8 millimeter one. It’s on YouTube, you can see it.”

“I had Dylan in a top hat and I shot it myself.And then we would jam with different friends. I had a studio in a church in North London, and we’d just choose different people, and have crazy sort of jam sessions. At one point there’d be like Joni Mitchell on drums, someone else on piano; everybody would swap around.

“We did a lot of jam sessions in that church and we culled some of them, but I never with the intention of making a record. It was more just like how you do when you pop by to see a friend and have a jam session.

“But sometimes we’d go back to my house and in the kitchen, we’d play it back on my cheap ghetto blaster. There’d be like twenty songs from every jam session, but there’d be no singing on them. And Bob would do this incredible thing – a genius in full effect — he would sing along and add melodies and bits of lyrics on top of all of them, just one after the other.

“I had another cassette player that I could record what was turning out the ghetto blaster but also record the kitchen. So in my archives of recordings, I’ve got one that’s called “kitchen recordings,” and one of those songs, or beginnings, of songs was this thing I always liked.

“When I was playing for the guys in Blackbird Studios with all those great players, about halfway through those sessions it sprung to mind. I listened to it on headphones and I thought this would sound killer played by these guys in a kind of country soul way. I listened to it and understood of it what I could, because they’re very bad recordings, and finished the song, kept some of the words that I could understand, and then wrote it into a song really about me and Annie.

“And then I sent it to Bob, in a quick sketch form, and he really liked it, and so I cut it with the band. And that’s the story behind that song.”

The magazine interviewer then asks, “So some of those lyrics were ones that he sang at that time?”  The reply is

2 Responses to “Worth The Waiting For” by Bob Dylan and Dave Stewart. And a bit more fun.