Updated to clarify the issue of the two versions of Santa Fe on the bootleg series.

The first time we knew that there was more to Santa Fe than the version that appeared on the very first Bootleg compendium (1-3) was when the version of “Lyrics” turned up in 2004 with the song included but lyrics that even allowing for the poor sound quality of the Bootleg version, were clearly a total reworking of the song.  The song was released again on volume 11: but (to be quite clear) not with the new lyrics. Quite what the point was of putting the original version out there twice while the published lyrics showed a different version, I am not sure, but it quite clearly confused me, if no one else.

Certainly the original was recorded in 1967, and I’d say the new lyrics came from then too, but Heylin thinks that Dylan wouldn’t have pondered building a geodesic dome in 1967.  I doubt there is anything in Heylin’s suggestion however for  Buckminster Fuller was playing with the shape and using the phrase in the late 1940s and his patent of the geodesic dome is dated 1954.   (Larry’s comment below seems to back this up).

So I guess Heylin is suggesting Bob wasn’t up to speed on such matters in the late 1960s, but reading the early lyrics, but I can’t see how he can reach this conclusion.  Bob’s knowledge has always struck me as singularly diverse while being patchy in places, so I can’t see how the argument stands.  I’d say both sets of lyrics were written at the same time – the summer of 1967.

I can’t prove this of course, so to distract from my lack of knowledge here’s a picture of the Big Pink, simply because I haven’t put up many pictures on this site (not wanting to get engaged in copyright arguments with the big picture agencies). 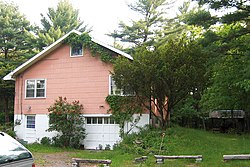 Those who study such things have the line up as Dylan, acoustic guitar and vocals; Robertson, electric guitar; Hudson, piano; Danko, bass; Manuel, drums.

As time went by so the name of the song moved between Santa Fe, Santa-Fe and Santa Fé.  I am not too sure it makes any odds but it seems important to some commentators, so I thought I’d mention it.

The album notes for The Bootleg Series Volumes 1–3, state that the song is “a typical combination of nonsense and fun, just for the hell of it, really,” and that seems to be the general conclusion of a fair number of reviewers, but others such as in the AllMusic review find it more significant.  Still just an enjoyable song with no deep meaning, but a decent and likeable song nonetheless and certainly one that is worth keeping.

Now I am on the side that thinks there is more to it than a joke, and in this regard I am with Steve Gibbons, who formed the Dylan Project, a touring band of quality musicians that performs Dylan songs and has a very relaxed and good relationship with its audience where ever they play.  Santa Fe has been in their repertoire, and I’m pleased about that.

But there is something else, and here my musical memory is letting me down.  For much of my life I’ve had the ability to hear a song and then relate it to its predecessors, instantly able to say, “Oh that’s based on ….” but as age has crept up on me I am finding myself in a position of hearing a song and thinking “Hey, that’s based on…” and then the origin of the song vanishes from my mind, and so instead of being able to show off, I’m left looking like an idiot, which is how I feel at such times.

So it is with Sante Fe.  I am sure the melody and structure is built on an earlier piece, but I just can’t find it in my head and no one else seems to have mentioned it.  But it is sooooo familiar!  Any help would put me out of my misery.

Anyway, here’s the verse that got changed into the geodesics

If looking back through the versions, just remember the lyrics on the official site are from the complete bootleg set, not the version that appears on 1-3.  Just to avoid any confusion of the type which in the first version of this review, I added to.

In the end, as the final verse of the final edition shows, it is all nonsense.  But for me it is jolly nonsense based around the standard three chords and a catchy little tune.  And why not?  It doesn’t have to be Desolation Row to be music worth listening to.

What is on the site

1: Over 400 reviews of Dylan songs.  There is an index to these in alphabetical order on the home page, and an index to the songs in the order they were written in the Chronology Pages.

2: The Chronology.  We’ve taken all the songs we can find recordings of and put them in the order they were written (as far as possible) not in the order they appeared on albums.  The chronology is more or less complete and is now linked to all the reviews on the site.  We have also recently started to produce overviews of Dylan’s work year by year.     The index to the chronologies is here.

3: Bob Dylan’s themes.  We publish a wide range of articles about Bob Dylan and his compositions.  There is an index here.

4:   The Discussion Group    We now have a discussion group “Untold Dylan” on Facebook.  Just type the phrase “Untold Dylan” in, on your Facebook page or follow this link

6: You might also like: A classification of Bob Dylan’s songs and partial Index to Dylan’s Best Opening Lines